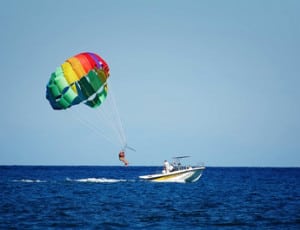 What could have been an amazing parasail ride over South Padre Island turned tragic when a woman fell to her death into the Gulf of Mexico. Dawn Strickland, 47, and her boyfriend Jonas Hackebeil were parasailing some 300 feet above the choppy Gulf Coast water when Dawn said she was in trouble.“She said she felt like her harness was slipping,” said Jonas Hackebeil, who was strapped into a harness next to his girlfriend.“I figured she was just nervous.” A few more minutes passed, when Strickland said she was “struggling to hold on.” The 45-year-old construction equipment salesman struggled through his grief to describe the events of that awful day, when his girlfriend of one year met her tragic end. “I turned to see what she was talking about and saw the harness had somehow slipped,” said Hackebeil, who lived with Strickland in Castroville. “At that point, I realized what was happening and tried to help her. I reached for her and motioned to the guys in the boat to bring us down.”

To his horror, Strickland then fell out of the harness and plummeted to the water below. A preliminary autopsy found that Strickland, who’d never tried parasailing before, died of “blunt force trauma with drowning.”

“It still doesn’t seem real,” Hackebeil said. “I don’t know what happened. It’s crazy. They strapped me in the same way they strapped her in.” Hackebeil had parasailed a few times before, and said Strickland was “nervous but excited” as workers at Sonny’s Beach Service strapped them both in. Hackebeil said he’d used Sonny’s several times before and had no concerns about safety. After Strickland plunged into the water, the parasail boat turned around, he said. The operators, a captain and one crew member, quickly reeled him in. Another boater attempted to resuscitate Strickland, then notified the Coast Guard of the accident. A boat crew from the Coast Guard station continued to perform life-saving measures before transporting Strickland to Valley Regional Medical Center, where she was pronounced dead. “I don’t know who to blame,” Hackebeil said. “I wish I did understand, to give me some answers.”

According to a National Safety Transportation Board report, there are no federal rules regulating the training or certifying of parasail operators or the inspection of equipment. Those who operate boats on waters under Coast Guard jurisdiction must hold a specific license issued by that agency. In the past three years, the parasailing industry has sought to regulate itself, coming up with voluntary standards regarding crew proficiency and training, recordkeeping, ways to monitor weather conditions and other safety guidelines. The Federal Aviation Administration banned parasail companies from operating within 5 miles of an airport or more than 400 feet above the surface of the earth. The Coast Guard has concluded “there doesn’t appear to be a major problem with deaths or injuries” in the sport. The NSTB found most accidents were caused by equipment failure, most commonly involving the tow line, which connects passengers to boats.

Losing a loved one due to the negligence or recklessness of another person is devastating in and of itself. Unfortunately, the emotional suffering and financial burden resulting from the death of a family member and the associated medical and funeral costs can cause further difficulties for the family of the wrongful death victim. If your family member was killed by another person’s wrongdoing, contact the Corpus Christi wrongful death attorneys at Bandas Law Firm today. Filing a wrongful death claim in Texas can be a complicated process, especially for someone without a background in personal injury law. The main goal of the lawyers at Bandas Law Firm is to ensure that your legal rights, and the rights of your loved one, are protected during this difficult time