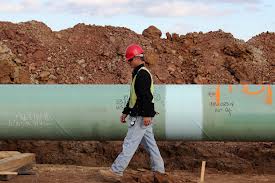 An East Texas man was killed this week in a devastating explosion in Rusk County, TX involving a natural gas pipeline, according to news reports. The victim of the Texas pipeline explosion was a husband and father of four and was working as part of a mowing team when he struck the pipeline, which belonged to Enbridge Energy, an energy delivery company based in Calgary, Alberta, Canada. If you or a loved one has suffered injuries in a pipeline explosion in Corpus Christi, or elsewhere in Texas, contact our knowledgeable lawyers at Bandas Law Firm to discuss your legal options. You may have grounds to pursue financial compensation for your injuries and medical bills.

Emergency management officials reported that 32-year-old Conner Wilson accidentally struck a live 12-inch natural gas pipeline while operating a mulching machine on August 12. The contact with the mulching machine caused the natural gas line to rupture, killing Wilson instantly. Fire officials, an EMS helicopter and troopers with the Texas Department of Public Safety (DPS) responded to the scene, and many residents in the area of the explosion were evacuated to safety. The evacuation has since been lifted, and Farm to Market Road 1798, which was shut down following the blast, has since been reopened.

Enbridge Energy, which has a subsidiary in East Texas that’s responsible for the 12-inch pipeline that exploded in Rusk County, does business all over the United States and Canada, but may be best known for the one million gallons of crude oil its broken pipeline in Michigan spilled into the Kalamazoo River. In East Texas though, Enbridge deals in natural gas, and the company has been cited for more than $150,000 in fines over safety violations since 2010. Since 2002, Enbridge has been associated with a total of 21 spills or leaks, and there have been two other incidents involving mowing crews that fortunately spotted a problem and made it to safety, unlike Conner Wilson.

The pipeline explosion that killed Conner Wilson took place about 12 miles southeast of Henderson, which is approximately 140 miles east of Dallas, Texas. Prior to the fatal blast, the pipeline in Rusk County had been leaking, but as of 6:35 pm, the leak had been addressed, according to emergency officials. If you have been injured in a Texas pipeline explosion, or if you lost a loved one in a fatal blast involving an oil or natural gas line, consult our reputable attorneys at Bandas Law Firm for legal help. You may be entitled to reimbursement for your losses, which you can pursue by filing a personal injury or wrongful death suit against the party found at fault in the accident.