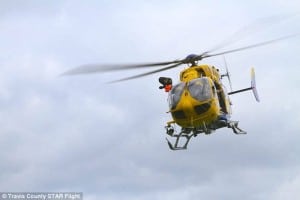 Flight nurse Kristin McLain, 46, fell to her death as she and a patient were being hoisted aboard a STAR Flight medical helicopter in Austin, Texas. According to an incident statement, McLain’s harness detached from the hoist cable on the helicopter, causing the deadly fall. A preliminary National Transportation Safety Board report stated, that McLain was riding in a position lower than usual, just before she fell after the helicopter’s pilot moved the aircraft forward due to the hoist cable spinning.

AVIATION EQUIPMENT TO BLAME FOR DEATH

McLain died while the STAR Flight crew was assigned and dispatched to rescue a woman who was injured while hiking in the Barton Creek Green Belt in Austin, Texas. The National Transportation Safety Board report stated, that as the Eurocopter MBB BK 117 hovered over the green belt, the joist operator lowered McLain, her medical equipment and a litter to the ground. After she secured the patient in the litter, McLain radioed the pilot, who moved the helicopter into position as the hoist operator extended the hook to her.

As McLain and the patient cleared the trees while being raised to the aircraft, the cable began what the report described as a steady spin. The pilot started moving the helicopter forward and the spin had almost stopped when the hoist operator noticed that McLain “was riding in a position lower than normal.” The report states,” that the flight nurse then fell from the line.” The rescued patient was transported to University Medical Center Brackenridge with injuries with non- life threatening injuries. NTSB investigators plan to review video and audio from the helicopter’s video and voice recorder system, as well as video from a hoist camera, which recorded operations and communications. McLain had been with the company for seven years.

Although aviation is one of the most important modes of transportation in the world, flying is an inherently dangerous act, combining extreme speeds, high altitudes and dangerous chemicals. Despite the fact that advancements in technology and maintenance have improved the safety of flying on private and commercial aircraft, simple errors and innocent mistakes can put the lives of travelers at risk, as well as the lives of people on the ground, if an aviation accident occurs. The Bandas Law Firm, P.C. is a Corpus Christi aviation accident law firm.  We represent pilots and passengers who have been injured in an aviation accident involving private airplanes, commercial airplanes, helicopters and other forms of aircraft.  We also represent the family members of pilots and passengers when an airplane crash results in the loss of a loved one.