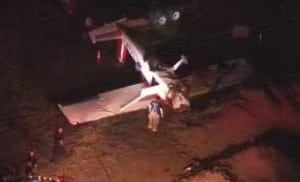 Authorities have reported that a pilot was injured when his single-engine plane flipped, while preparing to take off from a South Texas airport. The San Antonio Fire Department reported that the accident occurred at night at the Stinson Municipal Airport. The pilot was reportedly taxiing the plane at the end of the runway when the aircraft turned and flipped over, fire officials said.

Emergency personnel had to remove the pilot from the damaged cockpit. Crews took some time to get the pilot out of the cockpit because it had been completely crushed. Fire officials did not say whether the pilot was seriously injured. The Federal Aviation Administration is investigating the accident.

Although aviation is one of the most important modes of transportation in the world, flying is an inherently dangerous act, combining extreme speeds, high altitudes and dangerous chemicals. Despite the fact that advancements in technology and maintenance have improved the safety of flying on private and commercial aircraft, simple errors and innocent mistakes can put the lives of travelers at risk, as well as the lives of people on the ground, if an aviation accident occurs. Despite the relative safety of air travel, accidents and crashes can occur due to certain forms of human error or mechanical malfunction. These may include, pilot, mechanic or air traffic controller errors, defective equipment, failure to maintain aircraft, FAA regulation violations, or defective aircraft design.