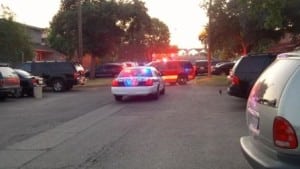 Two Corpus Christi children were hit by an SUV Tuesday night. One of the children remains hospitalized, the other has returned home.

The child now home is Caleb Edwards, age 10, who suffered being hit by the SUV at the La Armada Apartments. Caleb’s grandmother Donna Cantu said, Caleb has a concussion, scrapes and bruises, but is expected to make a full recovery. The other victim is a young girl who’s said to be seriously injured. The young girl, also age 10, is expected to be transferred to a hospital in San Antonio for additional treatment. Both children had been sitting in the street when the SUV hit them. The driver told police he didn’t see them, he was not ticketed.

The 10-year-old boy and girl were on the 1400 block of Tompkins when the driver came around the corner. According to Cantu, the kids were laying on the street watching the clouds. “He said that the car was coming and they were getting up and the car hit him and he somewhat went under the car,” she said. Allegedly, the 10-year-old boy blacked out after he hit his head on the bumper of the SUV. “When he woke up he was being dragged by the car,” said Cantu. The driver told officers he didn’t see the kids. As a result, he was not ticketed and was ruled that it was not his fault.

On any type of property or premises, it is important for the owner of that property to maintain reasonably safe conditions. This means following building and safety codes, ensuring the property is safe from hazards, and keeping things in good repair. Anytime a property owner neglects to do these things and someone is injured, that victim could have a premises liability claim. If you are the victim, you will need to contact an attorney to determine whether or not you have a claim for your own injuries.

Premises liability cases can include a variety of different properties, including shopping malls, public parks, stores, sidewalks, parking garages, parking lots, office buildings, and even personal residences. The most common type of premises liability injury is the result of slips and falls. However, there are many different injuries that could occur if the property owner is negligent in providing safe conditions. If you or a loved one has been injured due to a premises liability situation, then contact the Bandas Law Firm. Our attorneys have extensive experience with these types of cases and will go to work for you. Car accidents can result in severe and permanent disabilities, such as burns, head trauma, or even death. Whether your serious injury or loss resulted from a multiple- or single-vehicle accident, we will evaluate the factors that caused or contributed to your injuries and damages.